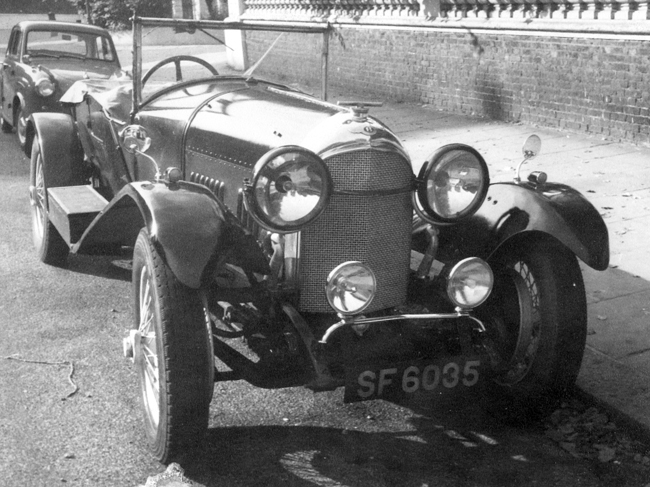 Commentary
The first Bentley, designed in 1919 and built in New Street Mews, Marylebone, took just nine months to produce.  It was a car that WO hoped “could be pushed all day long at sixty or more miles per hour over almost any sort of road surface.”

It was finished just in time for the first post-War London Motor Show at Olympia in November 1919.  Although, strictly speaking, the car was not quite complete – lacking essential parts, such as the crankcase, which was still being manufactured in Coventry.

As an exhibit, however, the Bentley was a huge success; and in that affluent period just after the First World War it appears that many people would have been prepared to buy the new 3-litre model, had there been any cars for the company to sell.

The Mews premises was far too small for any kind of larger scale production, so finding a suitable location for a properly equipped works became a priority.  There was some discussion about moving up to the Midlands, closer to suppliers, but WO was adamant that the headquarters should be in London.  Eventually a plot of land was bought in Oxgate Lane, Cricklewood, bordered by fields and rolling countryside, and it was here that the first building was erected in 1920 for the assembly of the next three experimental cars.

Establishing the new factory in Cricklewood seems to have been a difficult and frustrating process; as WO himself said, “a deuce of a lot of money went out, and none came in”.  However, by September 1921, all the hard work was beginning to bear fruit, when their first customer, Noel Van Raalte, collected his car, a 3-litre coupe.

In common with many other manufacturers, Bentley Motors chose motor sport as a way of testing and publicising their cars.  Races in which the cars were entered were generally carefully selected, with the intention of playing to the strengths of the car and gaining maximum publicity.  Considerable sporting success followed.  During the 1920s, Bentley developed an impressive racing record that included four wins at Le Mans (1924, and 1927-29), and victory in the 1929 6-hour and 500-mile races at Brooklands.

Despite these achievements, it seems that financial difficulties for the company were never far away.  The general consensus seems to be that Bentley Motors was under-financed from the outset.  When wealthy financier and Bentley racer, Woolf Barnato, bought the company in 1926, WO wrote, “the sudden relief from financial desperation after all those years was so wonderful that it took a bit of getting used to.”

After the takeover, WO Bentley stayed on for a while as managing director, but was eventually replaced as the new owner created his own board of directors.  WO’s brother, HM, left the company, and the company’s showrooms were moved to new premises in nearby Cork Street.

Although now on a sounder financial footing, it appears that the business was still heavily subsidised from the Barnato fortune.  By 1930, this was starting to reach its limit, forcing Bentley to withdraw from motor racing; a year later, in 1931, with falling sales, the company was put up for sale for a second time. With discussions well under way for a takeover by Napier, the board of Bentley Motors accepted a late offer from slightly shadowy organisation, called the British Central Equitable Trust, who were acting on behalf of Rolls-Royce.  Their successful bid resulted in the creation of a new company, Bentley Motors (1931) Ltd, and the transfer of production from Cricklewood to the Rolls-Royce factory in Derby.

The Cricklewood site today is now the Oxgate Centre; none of the former Bentley buildings exist.