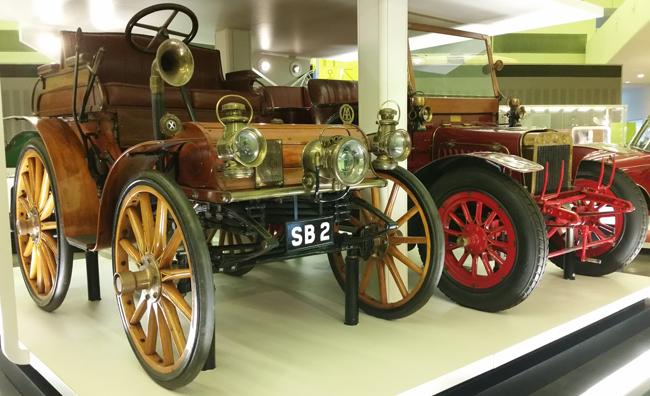 Commentary
George Johnston, a Scottish engineer and inventor, developed his (and Scotland’s) first car in 1895.

In order to turn this, and other ideas into a commercial operation, he created the Mo-Car Syndicate, probably towards the end of 1895 or early in 1896.  Members of the syndicate initially included George Johnston, his cousin, Norman Filton, and Thomas Blackwood Murray, an electrical engineer of some standing.  It was chaired by Sir William Arrol, of Forth Bridge fame, who provided much of the capital, along with thread manufacturers’, Archibald and Peter Coats.  In 1899, Filton and Murray left the Syndicate to set up their own manufacturing company – Albion Motors.

The Syndicate was engaged in the development a number of different types of motor vehicle – trams, trolley buses, dust carts – as well as cars. The first car produced was of a relatively unconventional design – a wooden-bodied dogcart, with a 3.2-litre, 12 h.p, twin-cylinder, horizontally opposed engine,  Unusually, it remained in production until around 1907.

Yate Street was the Mo-Car Syndicate’s first factory, but on the evening of May 8th 1901, a serious fire broke out in the two storey brick building, which was filled with engineering plant and motor cars in the course of construction.  It was a major blaze, reportedly visible “from miles on every side, attracting spectators from all quarters of the city”.

By the time the fire brigade arrived it was impossible to save the building.  The cost of the damage was estimated to be between ten and twelve thousand pounds, and all the company drawings and records were destroyed.

However, just over a week later, through a remarkable stroke of good fortune, it was announced that production would be resumed at the old Underwood Thread Mills in nearby Paisley, courtesy of Coats, one of the major Mo-Car investors.