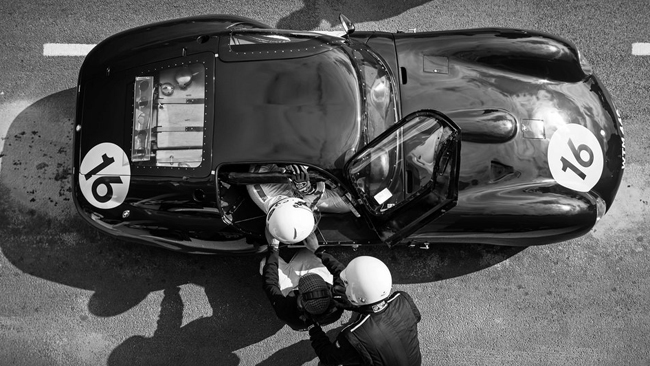 Brian Lister, who was born in 1926, was interested in cars from a very early age, and began competing in driving tests during his National Service.  His first competition car was a Morgan 4/4, from which he progressed to a Cooper-MG, and then to a car made by John Tojeiro.

It was while he was racing the Tojeiro, that Brian Lister first met driver Archie Scott Brown at a local sprint.  “His car (an MG TD) should never have beaten mine,” said Brian Lister in a later interview with Motor Sport, “I went up to him and asked if he’d like to drive the Tojeiro in future, while I concentrated on preparation.”

During the 1952/53 season, under this partnership, Archie Scott Brown was virtually unbeatable; and it is this success that seems to have spurred Brian Lister into developing his own car.  “By June 1953,” he said, “I’d come to the conclusion that we were promoting Tojeiro’s name rather well, but that we might do better promoting our own.”

The decision to build his own car seems to have been as much a commercial as a sporting consideration.  With a £1,500 loan from his father, Brian Lister agreed to build a car within six months that would promote the name of the company.

By the end of 1953, Lister had produced their first running chassis, using an MG engine.  A few months later the car had been fitted with an aluminium body and was ready for action.

After a successful start to the season, the Lister-MG was entered for the 1954 British Empire Trophy race at Oulton Park.  With high hopes of at least a class win, the team suffered a major setback when officials withdrew Archie Scott Brown’s racing licence due to his disability.  (He had been born without a right hand and his feet and legs were severely deformed.)  After a considerable amount of campaigning, Archie Scott Brown’s licence was restored in time for him to race a new Bristol-engined Lister in the British Grand Prix meeting at Silverstone where Archie won his class, finishing fifth overall, only beaten by the more powerful works’ Aston Martins and Jaguars.

By this stage Lister’s were also producing customer cars, for which the company was registered as Brian Lister (Light Engineering) Ltd., at the above address.  In 1956, a 2-litre Maserati engine was installed in a car of a lower and more streamlined design, known as the “flatiron”.  Although it looked very impressive, the car was much less reliable than previous Listers and was not generally judged to be a success.

In 1956, a customer asked for a 3.4-litre Jaguar engine to be installed into a Lister chassis. Motor Sport archives indicate that Brian Lister initially opposed the idea, although the project project eventually went ahead when it received support from Jaguar and British Petroleum who were at the time both looking for publicity from motor sport without direct works involvement.

A condition for the supply of Jaguar engines was that Lister should produce a car that could be entered in outright sports car racing and, perhaps Lister's best known car, the Lister-Jaguar “Knobbly” was the result.  Its name being derived from the car’s bulging wheel arches and low radiator cowl, designed to reduce frontal area.

Like most other Listers, the Lister-Jaguar had considerable success.  However, in May 1958, Archie Scott Brown, driving a Lister-Jaguar, was tragically killed in an accident at the Spa circuit in Belgium.  Brian Lister later said that the loss of his close friend  was a terrible blow, but said it was not the cause of the team's departure from motor sport.  Lister continued to compete for the rest of the season; but, despite support from Jaguar and BP, announced during the following year its intention to withdraw from racing, fearing that the costs of running the racing team would damage the company’s core engineering business.

In 1964, Listers were commissioned by the Competitions Department at the Rootes Group to build three fastback-bodied Sunbeam Tigers for that year’s 24-hour race at Le Mans.

In 1986, racing driver and engineer, Laurence Pearce obtained the right to revive the Lister name, developing the 200-mph Lister Le Mans, followed in 1993 by the Lister Storm.  In 2000, the Lister team won the FIA GT Championship.

In 2013, all the Lister assets were purchased by Andrew and Lawrence Whittaker, owners of a car warranty business, based in Lancashire, with the intention of building a limited number of the Lister-Jaguar Knobbly, using the original plans and tooling at the George Lister Engineering premises in nearby Fulbourn.