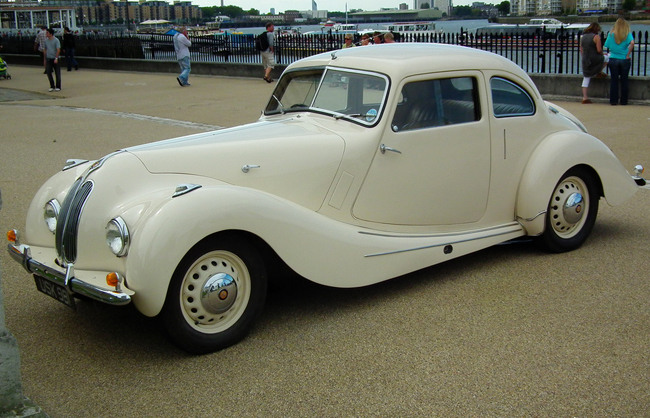 Derived from, and originally part of, the Bristol Aeroplane Company, Bristol Cars has been defined almost throughout its entire history by its link to the aircraft industry.

The Company’s first factory at Filton in Bristol was a converted tramway shed, and its first aircraft was of a French design, produced under licence.  Although this was not a success, many of the subsequent designs were; the Bristol F2 Fighter is regarded as one of the most outstanding aircraft of the First Wold War.

In 1920, the company was renamed the Bristol Aeroplane Company Ltd, and known locally as BAC.  Although its output was principally military aircraft and engines, Bristol also produced a number of frames and bodies for Bristol buses and Armstrong-Siddeley cars.  (The Bristol Cars company website also makes reference to production, shortly after the Armistice, of a lightweight car named the Bristol Monocar.)

During the 1920s and 30s, BAC continued to grow, and by the outbreak of the Second World War, the works at Filton was said to be the largest aircraft manufacturing factory in the world.

Six years later, at the end of the War, facing reduced demand for military aircraft, Bristol was once again forced to diversify its production.   Following the suggestion of Sir George White, son of the company founder, it was decided to use a small part of the company’s workforce in the production of cars, designed and built to reflect Bristol’s aircraft heritage.

Bristol’s first model, introduced in 1946/7, was the Bristol 400, a two-door sports saloon.   It was an attractive and distinctive design, developed from drawings and data acquired from BMW soon after the end of hostilities.  Not surprisingly, it bore more than a passing resemblance to the BMW 327, built in Eisenach in Germany between  1937 and 1941.    Although the 400 was derived from the BMW 327 and 328, it was not a copy of the German cars.  Instead, much of the BMW design was re-worked, with components being manufactured to exacting standards in a plant adjoining the aircraft works.

A third body style was developed in 1953, which continued to evolve until the early 1960s, by which time the company had replaced the BMW-derived 2-litre engine with a 5.1-litre Chrysler V8.  To this day, Bristol cars continue to be powered by Chrysler engines.

In 1956, the Bristol car division was separated from the aircraft company, and further changes took place in the 1960s when the company was acquired by Sir George White, grandson of the founder, and Tony Crook, a former racing driver and Bristol’s London distributor.

In 1976, a new model range was developed, the Type 603 – named, according to the Bristol Owners’ Club, because of the car’s introduction 603 years after the granting of the city of Bristol’s first charter.

The 603, or 600 Series as it is known today, is still in production and personifies the luxurious but understated nature of Bristol cars.  It was often said that Bristol was an atypical manufacturer; it didn't advertise, it had very few dealerships, and rarely offered its cars to journalists for road testing.

In 1985, car production was moved from the original site at Filton to nearby Patchway Trading Estate, with car sales undertaken from the company’s only showroom, on Kensington High Street in London.

In 2002 and 2003, two further models were introduced, the Speedster and Fighter with V8 and V10 engines, respectively; with the design of both more redolent of some of the sports and racing cars produced by the company in the early 1950s.

In March 2011 it was announced that Bristol Cars had gone into administration but, just over a month later, the assets and goodwill of Bristol Cars were acquired by Kamkorp Autokraft, part of the Frazer-Nash group. After this, Bristol was largely involved in restoring and selling earlier models; however, in 2016, the company announced plans to manufacture a brand-new car: the Bristol Bullet.

Other than the brief appearance of a prototype, nothing was heard from the company, until May 2020, when, following Kamkorp's collapse, Bristol once again entered liquidation.  Three months later, the remaining company assets were sold at auction.

The original location of the Bristol car division.