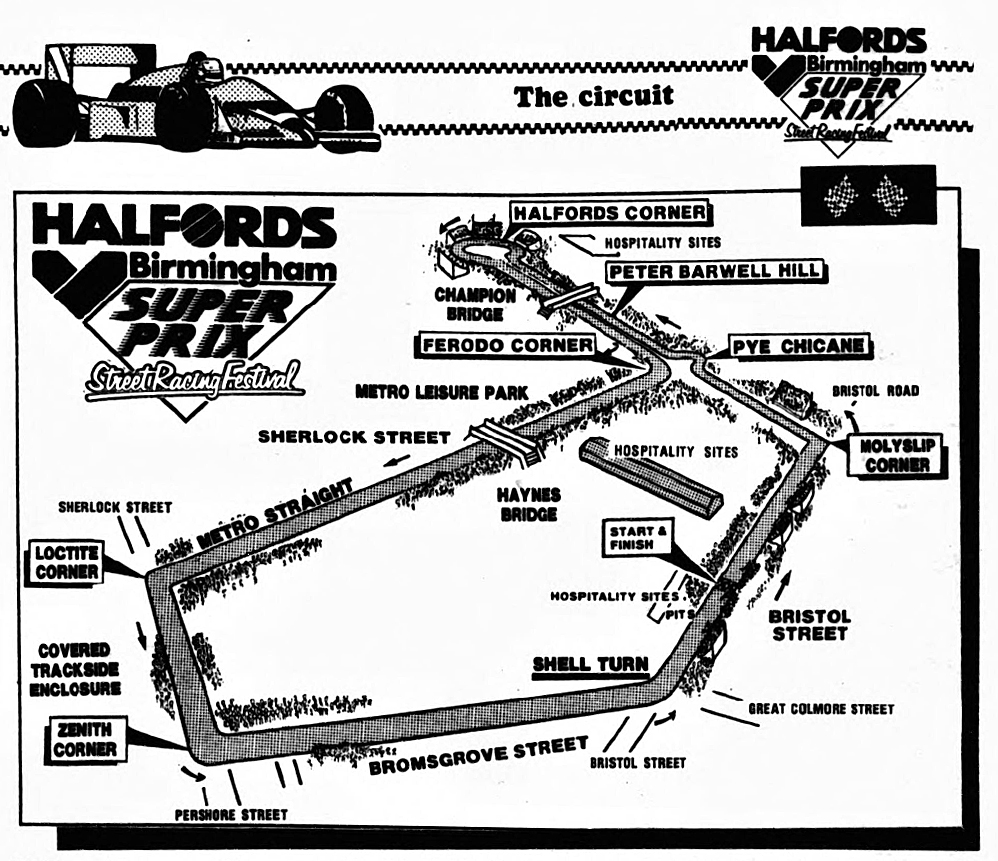 Commentary
The idea of a motor race through the streets of Birmingham was proposed during the 1960s by local councillor, Peter Barwell, and Birmingham businessman and racing driver, Martin Hone.

Both men wanted to change the public’s perception of the City, from that of an old, drab, industrial area into something much more modern and exciting.  They believed that a motor race would achieve this, and also tie in perfectly with the Birmingham’s long-established motoring history.

Progress was, perhaps inevitably, slow.  In their book on the story of the race, David Page and Sam Collins leave the abiding impression of the organisers determinedly trying to push ahead with the project, facing equal measures of support and opposition.  Some local politicians enthusiastically embraced the idea of the, whilst others countered with concerns over cost, disruption, noise, and safety.   Perhaps surprisingly, opposition also came from within motorsport itself.  One such voice was from the owners of the Silverstone circuit, who stressed that permanent tracks provided much more suitable locations.

In 1970, the first of a series of motoring festivals took place in Birmingham, designed to build support for the race, with famous drivers and cars taking to the City’s streets. 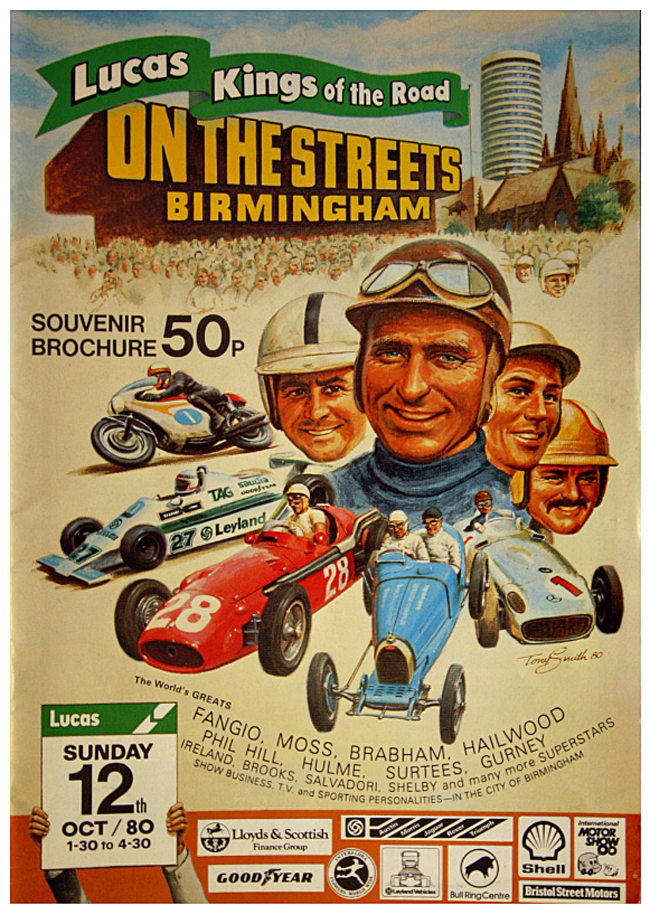 The festivals, which ran in 1970, 1972, 1975, 1978, 1980 and 1984, included a daily cavalcade of sports and racing cars along with all kinds of themed motoring events.  Not all the vehicles were road-legal; but, at the discretion of the Chief Constable, single seater and sports cars were allowed to run on the City’s streets in an illegal state, ie, without lights, horn, and tax etc.

The festivals were very popular; an estimated 200,000 people attended the final event in 1984.  The attraction lay not only in the cars, but also in the presence of famous figures from motor sport.  Stirling Moss was involved in the project right from the start; other stars appearing included Derek Bell, Sir Jack Brabham, Tony Brooks, Juan Manuel Fangio, Mike Hailwood, Phil Hill, Alan Jones, Roy Salvadori and Tom Wheatcroft.

In 1980, a renewed – and ultimately successful – attempt was made to stage the race.  Plans for the circuit were redrafted, and by November 1984 overwhelming support for the project had been given by the City council.  Further help was provided by the results of a referendum held among local residents and businesses showing a significant majority in favour of the race.

Aside from all the usual problems associated with staging a major motorsport event, the backers of the Superprix, as it eventually became known, also faced the challenge of changing the law to allow motor racing on the public highway.  This was eventually achieved in October 1985, with the passage of the Birmingham City Council Act, allowing for the provision of motor racing on certain streets in the City.

The first racing was scheduled for the bank holiday weekend of the 24th -25th August 1986.

Vandalism overnight to a section of the barriers, together with errors in the assembly of parts of the Armco, caused the Sunday practice and qualifying sessions to be delayed.  However, all was in place for the main Superprix on Sunday – except, of course, the weather.  Heavy rain, which persisted throughout the race, led to a delayed start, and gave rise to a number of accidents.  On lap 25, British driver Andrew Gilbert-Scott collided with an abandoned car, partially blocking the circuit and littering the track with debris.  The race was red flagged, with the leader, Spanish driver Luis Sala, being declared winner.  Half points were awarded to the top six finishers. 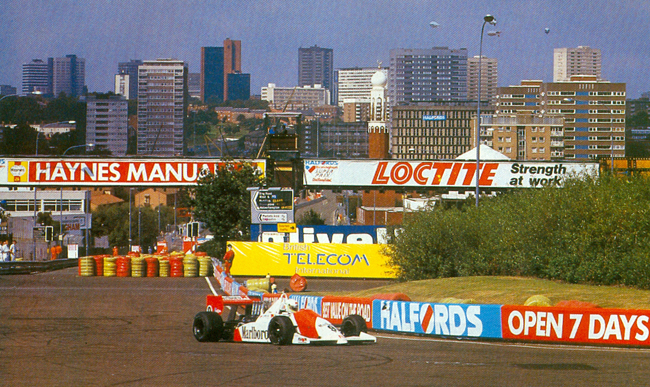 The following year’s race was again over the last weekend in August, but this time run under far better conditions.  With fine weather and bigger crowds, the race, won by Stefano Modena, was judged to have been a great success.

For 1988, a round of the British Touring Car Championship was added to the programme.  However, it was a series of accidents on the circuit (including one involving James Hunt’s younger brother David) that provided the main story of the afternoon.  The race was red flagged twice, before Robert Moreno finally took the chequered flag.

The 1989 race was run in fine weather, and won by Jean Alesi.  It was probably the most successful Birmingham race to date, but despite an estimated 80,000 spectators in attendance, the event continued to lose money.  Total loses over the four years now ran to more than £1.6m. 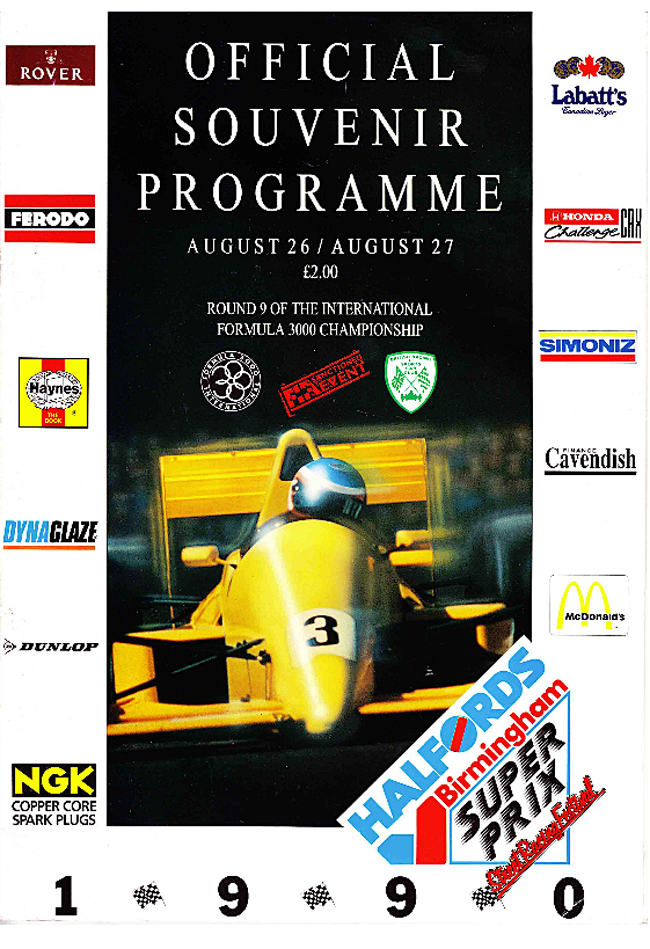 The Birmingham Superprix was run for the fifth time in August 1990, and won on this occasion by Eric van de Poele.  It was an exciting race, but attendance figures were down – and losses continued to grow.

A continuing failure to make a profit from the race led Birmingham City Council to decide to seek private funding for the event.  However, there were no formal tenders, and although there was speculation that private investment still could be forthcoming, none materialised.

This remains the situation today.  In 2003 a campaign was launched to bring back motor racing in Birmingham, but again to no avail.  More recently talk has focussed on running a race in London – possibly as part of the F1 calendar, but more likely with the new Formula E electric cars.