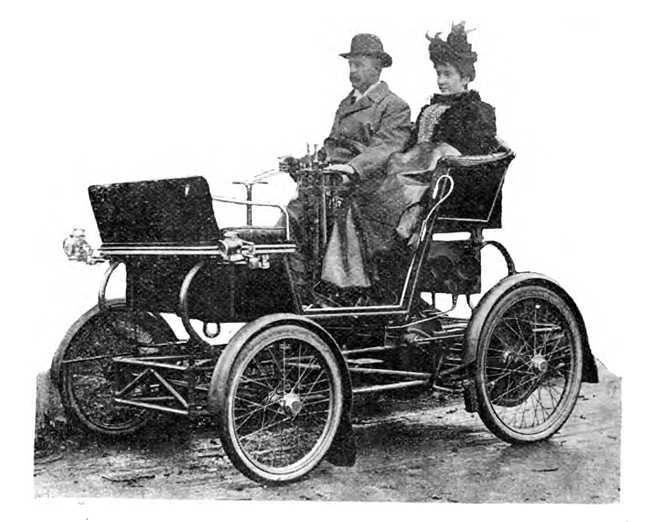 A short-lived motoring marque established by Dan Albone - a pioneering cycle manufacturer and the inventor of the first practical modern tractor.

Location
The Ivel Cycle and Motor Car Works, Shortmead Street, Biggleswade.  (The Ivel Works and the Ongley Arms lay on a piece of land running down to the river on the west side of Shortmead Street at the junction with Sun Street.)

Commentary
Daniel Albone was born on September 12th 1860, the youngest of eight.  The family home was the Ongley Arms Inn on Shortmead Street Biggleswade, then part of the Great North Road.  His father was a sawyer by trade, but also ran a market garden and small-holding.

At the age of nine, Dan was given a boneshaker bicycle, by his cousin which, by all accounts, captivated the boy’s interest in both cycling and engineering.  By the age of 13, Dan had built his own ‘ordinary’ (penny-farthing) bicycle and, in the coming years, developed what was to become an international reputation as both a racing cyclist and a manufacturer of high quality cycles.

In 1880 he set up the Ivel Cycle Works (named after the river flowing through Biggleswade) on land behind the Ongley Arms.  His cycles were light and durable and often characterised by a high degree of innovation.  In 1886 he built the first practical tandem and, in the same year, patented the first ladies’ ‘safety’ bicycle.  He also built tricycles, lightweight traps and ball-bearing hubs for carriage wheels. 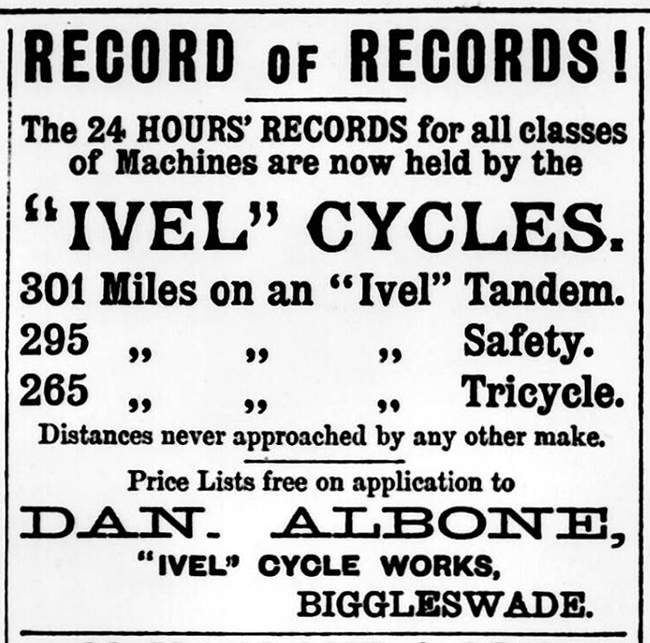 His cycles were much-admired for racing, over both short and long distances.  In October 1887, Richard Tingey and George Mills, both employees at the Ivel Works, rode 301½ miles in 24 hours on a Dan Albone tricycle tandem, beating the previous record by 42 miles.  A year later, Dan himself, together with E E Glover, broke the national 50-mile tandem record.

With the Ongley Arms becoming so popular with cyclists as a place to meet and get help with running repairs, Dan decided to extend and rebuild it, changing its name to the Ivel Hotel.  He also enlarged the cycle workshops. 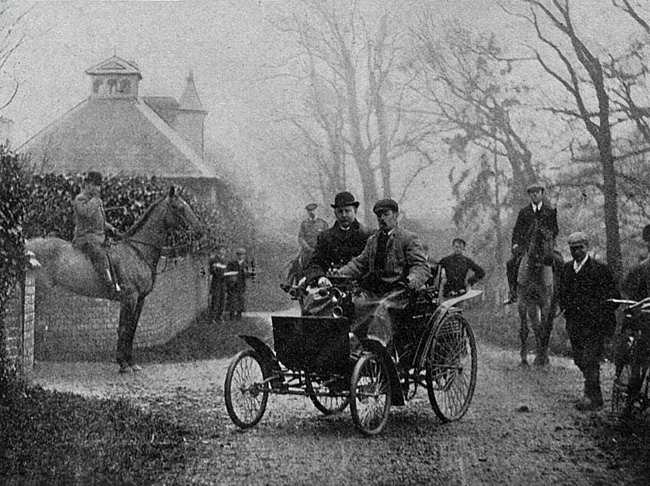 It was also round this time, probably late 1897, that Dan Albone bought his first car, a 1½ h.p Arnold-Benz, which became a subject of some interest in the local area.  In January 1898, he completed a 100-mile round-trip, running the car north from Biggleswade to Stamford in Lincolnshire, and then back again.  He was also the local Benz agent, by this stage trading as the Ivel Cycle and Motor Car Works.  By 1899, he had started to develop his own car, known as an Ivel, which he completed in November of that year.

With a steel cycle tube underframe, supported by four coil springs, each within in a steel cylinder, it was powered by a 3 h.p Benz-type motor located in the centre of the frame.  The car had a maximum speed of about 16 or 17 mph.

The four-seater body was mounted on “C” springs, entirely separate from the frame, designed to minimise vibration from both the engine and the road.  Running on pneumatic tyres, the car was steered by means of a handle, located on the right-hand side, and could be stopped and started again without having to leave the driver’s seat. 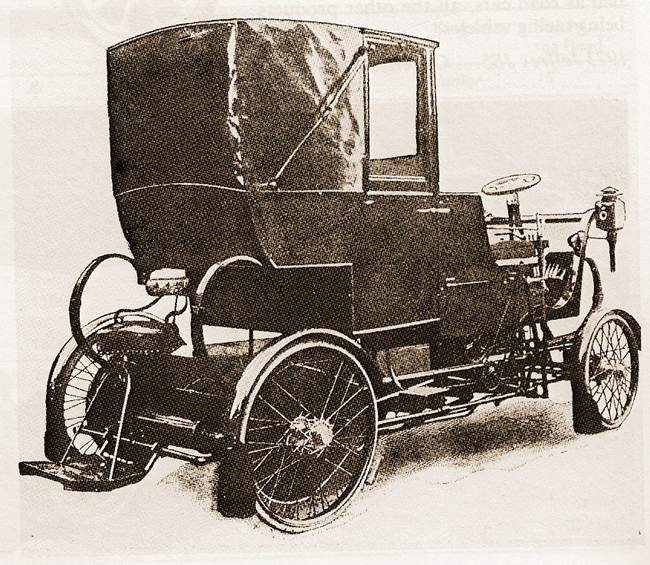 Thirteen months later, in December 1900, a second Ivel motor car was built for a gentleman by the name of R C Vyner - possibly the successful racehorse owner and trainer of the time.  Known as the Ivel Landaulette, it was larger than the previous model, with a wheelbase of about a hundred inches.  Capable of carrying five (two inside, one beside the driver, and a seat for the servant at the rear), it was powered by a two-cylinder, eight horse-power engine of British design, with a three-speed gearbox.  Sharing a similar suspension system to the previous car, it was clearly built with an emphasis on convenience and comfort.

First exhibited at the Stanley Cycle Show, the Landaulette was well-received by the press, with The Cyclist journal noting: “Whatever Dan Albone undertakes, he does well.  He has produced one of the most perfect motor carriages ever built in terms of comfort and elegance …. Really a marvellously perfect car, and well worth the £500 for which it has been sold.” 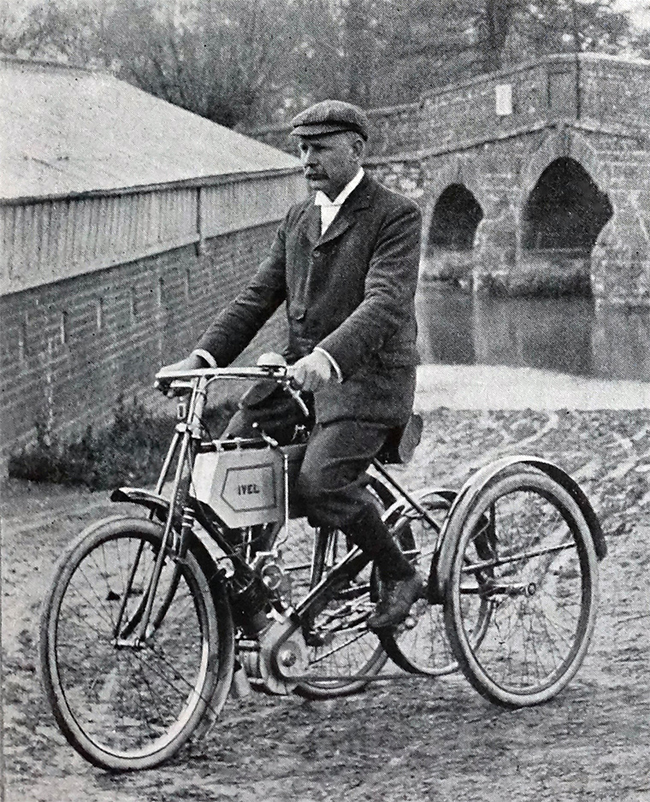 It is possible, although by no means certain, that Dan Albone built just two cars.  In 1901, he added the Ivel Motor Bicycle to his catalogue which, based on a strengthened bicycle frame, had a 1½ h.p Minerva engine driving the rear wheel through a twisted rawhide belt.  Capable of 35 mph, a similar ladies’ machine was also soon offered.

However, Dan’s greatest engineering achievement was yet to come.  Having, reportedly, worked on the idea for almost six years, in early 1902 he obtained a patent for his Agricultural Motor; a three-wheeled tractor, capable of hauling 2½ tons and driving stationary machinery and other implements.

Although traction engines and oil-powered tractors were already used in farming, they tended to be too heavy and insufficiently flexible for many applications.  The lightweight Ivel Agricultural Motor more than adequately addressed these problems. 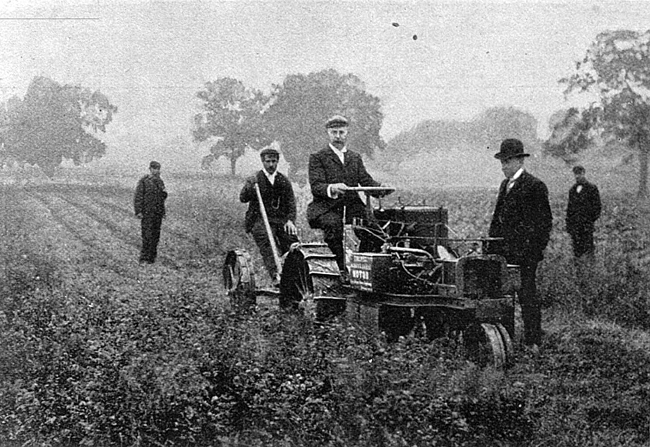 After successfully demonstrating the tractor’s capabilities in fields around Biggleswade, Dan Albone established a new company, Ivel Agricultural Motors Ltd, for manufacture of the new machines.  Interestingly, the directors of the company included S F Edge and Charles Jarrott, both of whom Dan had known from his cycling days.

Describing the Agricultural Motor as “the farmer’s friend”, an early newspaper report waxed lyrical over the machine’s capabilities.
“It will reap and sow, plough and mow, and perform all manner of hauling, and then work its own way, or haul a load to the barn, where it will thrash and grind corn, cut turnips and chaff, turn the churn, and make itself generally useful at a very small cost.”  (The Sketch, 17th September 1902.) 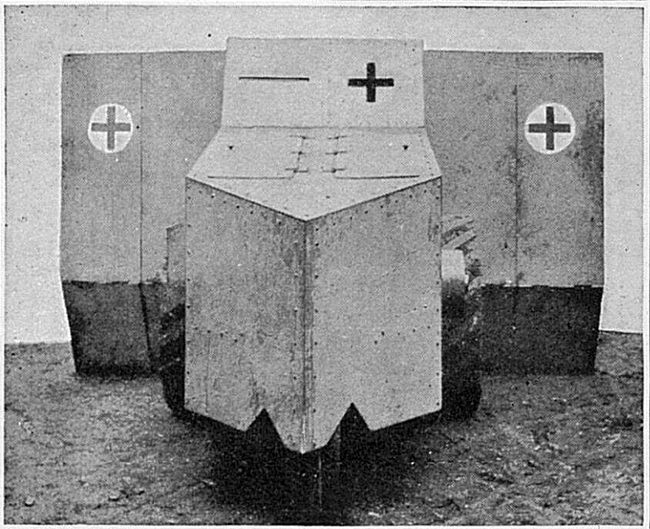 Over the next five or six years, the design received many awards and, like other Ivel products, a reputation for quality and reliability.  It is thought that about 500 Ivel tractors were built in all; with exports to Australasia, South America, and other parts of Europe.  It was also, for a while, made under licence in the United States.

On the morning of 30th October 1906, Dan Albone suddenly collapsed and died in his office as a result of a stroke.  He was 46 years of age.  The tributes to him were many and fulsome in their nature.  He was universally described as a kind and good man, as illustrated in the title of Kathy Hindle’s and Lee Irvine’s book of his life, see below.

Dan’s wife, Elizabeth, kept the business going for a number of years, but by 1918, the company was losing too much money, and was finally wound up in 1922.

A short-lived motoring marque established by Dan Albone - a pioneering cycle manufacturer and the inventor of the first practical modern tractor.