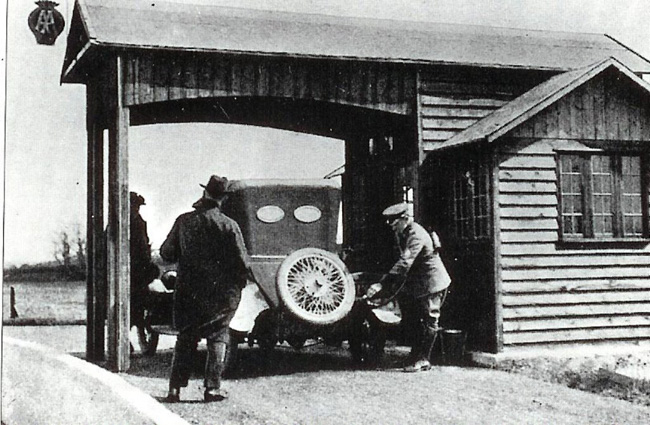 Today, the site of Britain’s first petrol station is a lay-by on the A4 Bath Road, with no indication of its historical significance.

Location
On the northern side of the Bath Road (A4), close to the junction with Station Road and Grange Lane, and today marked by a lay-by.  The spot lies about two miles from Aldermaston village, and approximately one third of a mile from Aldermaston Wharf.

Date
From November 1919 until at least 1925.  The station’s official opening is believed to have taken place in March 1920.

Commentary
There were no specialist filling stations in Britain for early motorists.  Instead, petrol was obtained, usually in relatively small quantities, from a variety of outlets, including cycle dealers, hotels, ironmongers, chemists, repair garages, blacksmiths and general stores.  After a change in the law in 1900 concerning the storage of fuel, petrol was commonly sold in two-gallon cans.

Serving fuel from a pump began in the United States around 1908, with dedicated filling stations beginning to appear from about 1911.

In Britain, the first roadside pump was installed outside the premises of Legge & Charmier (possibly on Abbey Foregate) in Shrewsbury in 1914 but, perhaps surprisingly, this did not give rise to any kind of standardised filling station.

According to Kathryn Morris and John Minnis, the initiative for the creation of petrol stations as we know them today, came from the AA (the Automobile Association) in an attempt to help its members obtain British-made benzole, an early form of motor spirit derived from coal tar and gas.  Its sale was promoted as a cheaper alternative to Russian imported petrol and as a patriotic response to the repression and atrocities carried out by the Bolsheviks against their political opponents.

The station was intended for members' use only, and the AA made no profit on the fuel.  The Aldermaston station had an underground tank, a Bowser pump inside the building, with the hose taken through the window, a compressor for inflating tyres, a fire extinguisher, and a toilet, described by Trevor Lord as "of bucket type, and seldom used".

Other filling stations (or replenishment pits, as they were apparently known) followed on from Aldermaston.  Amongst these were those at Blue Boar Corner on the Coventry-Dunchurch Road, and Bramham Moor, ten miles north of Leeds. 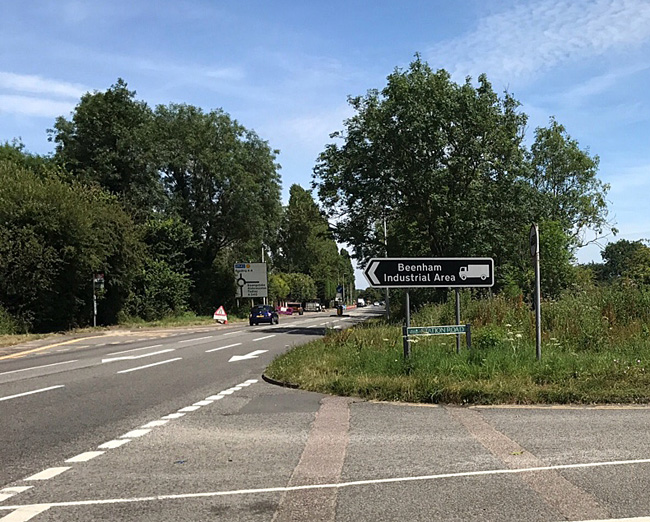 Much of the information in this article was drawn from Kathryn Morris and John Minnis‘s book, Carscapes.

On the north side of the Bath Road; the junction of Station Road and Grange Lane, Aldermaston.

The site of Britain’s first petrol station - a lay-by on the A4 Bath Road.